The 10 strangest behaviours from helicopter parents of job seekers

It is often said that mom and dad know best. However, when it comes to their children looking for jobs, do they really know best? Not always, according to a new research from OfficeTeam.

The survey, polling more than 600 senior managers, found that 35% of respondents thought it was annoying when helicopter parents are involved in their kids’ search for work.

Another 34% preferred that parents stay out of the job hunt, but would let it slide and only 29% thought this ‘parental guidance’ wasn’t a problem.

The survey also asked managers to recount the most unusual or surprising behaviour they’ve heard of or seen from helicopter parents of job seekers.

Though all responses were amusing, we at Human Resources thought the following 10 were the weirdest:

One even tried to take the reverse psychology approach – “When we called one candidate, his mom answered and asked us not to hire him,” a respondent recounted.

“Parents want the best for their kids, but being overly involved in their child’s job search can cause more harm than good,” said Brandi Britton, a district president for OfficeTeam.

“It’s a positive for mom and dad to help behind the scenes by reviewing resumes, conducting mock interviews and offering networking contacts. However, ultimately, companies seek employees who display self-sufficiency and maturity.”

ALSO READ: Are these the world’s 11 worst interviews of all time? 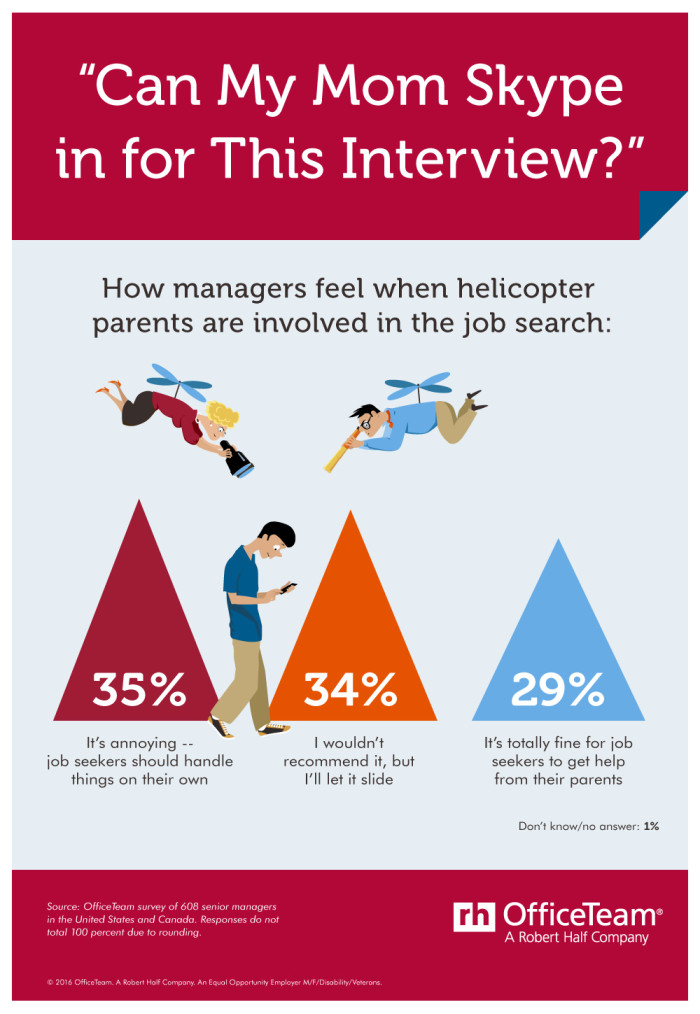 What does Cathay Pacific mean by non-essential staff?

Millennials are the most reluctant to take time off work

The future of HR’s role in business

Is your future bleak or bright? It all depends on how you plan your people strategy, say HR leaders. Join The Futurist to hear mor..

Nothing better than a free lunch for some Hongkongers

Sometimes one can’t help, but be impressed with the creativity of colleagues with a thick skin when it comes to getting stuff for ..

Smartphones put managers in a tough position, since both their absence and their presence could impair employees' concentration...

The first phase will involve consultation with the stakeholders to get their views and feedback...

Will teachers lose jobs due to school mergers in Singapore?

In a press statement, the MOE affirms that there will be no staff retrenchments in line with the school mergers...